Minecraft pumpkins are a great way to decorate, but they aren’t just for Halloween – they’re one of the most versatile blocks in Minecraft, with several surprising uses. They appear naturally in most green biomes, but require a grass block with air above it in order to spawn. They also naturally show up in some villages, and in stem farm rooms inside woodland mansions, but those are particularly tricky to find – luckily, we’ve identified a Minecraft seed that spawns you a mere hundred blocks away from one.

You’ll also find carved pumpkins – the spooky siblings of regular pumpkins – in rail rooms in woodland mansions. Carved pumpkins show up in pillager outposts inside tents alongside normal pumpkins, too, and atop scarecrows. Pumpkins also generate instead of hay bales outside taiga and snowy taiga villages. There are even more ways to get your hands on a pumpkin – they have a 15.6% chance of showing up in chests inside shipwrecks, and you may be able to buy one from a wandering trader.

There’s one more way to get hold of a carved pumpkin – if a hostile Minecraft mob spawns during Halloween, there’s a chance they’ll show up sporting a carved pumpkin on their head. In order to steal the pumpkin, you’ll have to kill it with a tool you’ve added Looting to at a Minecraft enchantment table. The chances of it dropping are pretty slim – you’re better off carving your own, which we’ll explain how to do below, before guiding you through the Minecraft pumpkin’s varied uses, but spotting a pumpkin-headed mob during spooky season is still pretty fun. 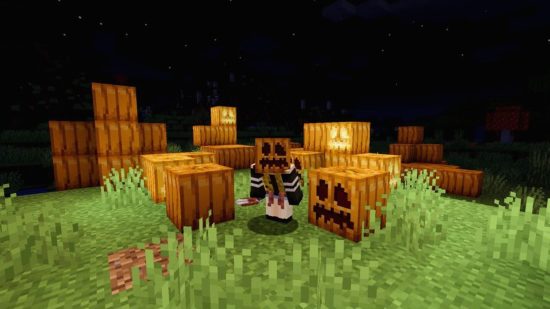 How to carve a pumpkin in Minecraft

Carving a Minecraft pumpkin is simple – use shears on an uncarved pumpkin. You’ll receive four pumpkin seeds, as well as a spooky new friend. It probably goes without saying, but no, you can’t un-carve a Minecraft pumpkin – you’ve brought it into the world, and you’re responsible for it now.

You can craft a jack o’lantern by combining a carved pumpkin with a torch – they provide a small amount of light, and can be placed underwater to illuminate the ocean floor, which is always useful. 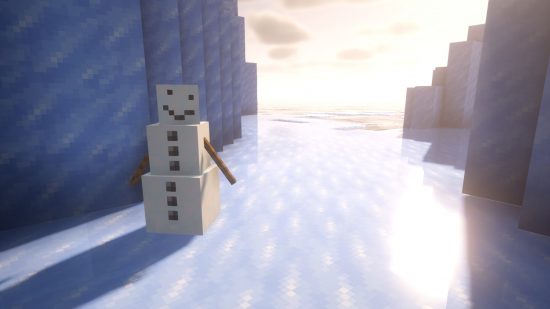 Do you want to build a snowman?

Carved pumpkins aren’t just for decoration – they can also be used to create iron or snow golems. Place four iron blocks in a T shape before popping the carved pumpkin or jack o’lantern on top to make your Minecraft iron golem.

For a snow golem, you’ll stack two snow blocks vertically and top it off with your carved pumpkin. Take this one step further with a little known fact. Using shears on a snow golem removes the pumpkin from its head, revealing the cute little face of coal beneath.

How to make a pumpkin pie in Minecraft

Ah, pumpkin pie. One of the more appealing Minecraft foods available, at least before you add any food-based Minecraft mods into the equation. Here’s how you can whip up a comforting pumpkin pie in your Minecraft kitchen (fancy kitchen build not required, but it’s more fun that way).

To make pumpkin pie, combine a pumpkin with sugar and an egg in your crafting table. It’s as simple as that – and eating one restores eight hunger and 4.8 saturation. If cooking isn’t your forte, apprentice-level farmer villages might trade you four pumpkin pies in exchange for an emerald. You might be able to find them in chests in taiga villages, too. 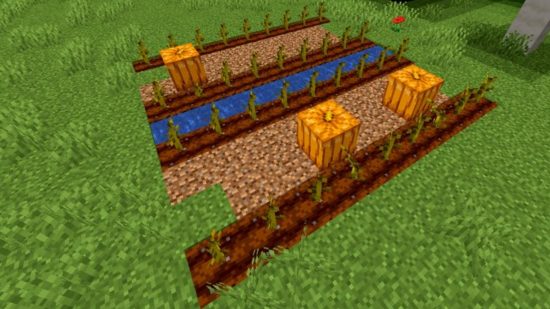 How to make a Minecraft pumpkin farm

So, now you have a pumpkin pie addiction and you need a constant supply of winter squash. This calls for a pumpkin farm. Hopefully, you didn’t eat your last pumpkin, because you’ll need to shear it for its seeds (or place it in a crafting grid). These seeds need to be planted on hydrated farmland, with an empty spot next to it where the pumpkin can go, as – like melons – they grow a stalk and generate on a neighbouring block. It’s possible for one pumpkin to grow attached to two stems, which isn’t efficient, so you’ll need to make sure each stem has one spawnable spot that doesn’t overlap with another stem’s spawnable spot.

There are pumpkin farm designs of varying efficiency, but the design above is a good place to start – it’s based on a 9×9 grid. Technically, only the middle square needs to be filled with water, but you do need to fill the rest of the row with something, to avoid overlap. This is a manual Minecraft pumpkin farm design – if you want to know how to create an automated pumpkin farm, check out NaMiature‘s YouTube tutorial  for a 1.19 farm below. The most efficient pumpkin farms will include melons, as alternating them prevents overlap, but you can use just pumpkins if you wish. 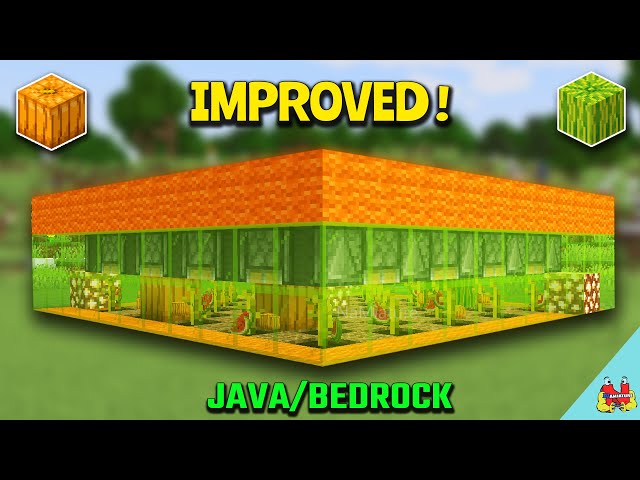 There are a few more cool things you can do with pumpkins – place one under a note block, and it’ll generate didgeridoo sounds when the block is activated. You can also wear the carved pumpkin on your head – it’ll obscure your vision, but you can look at Endermen without them getting annoyed at you. If you’re decorating your Minecraft house with pumpkins, why not add a decorative sea pickle on top – it looks just like a stalk.

So now you know how to grow a field full of pumpkins, you’ll be ready for spooky season, thanksgiving, or any time of year, really. While you’re waiting for your pumpkins to grow, take a look at some of the other farm ideas to spruce up your outdoor Minecraft builds, and make sure you’re wearing the right Minecraft skin to compliment that carved pumpkin head.

The Full Nerd awards: Our favorite PC hardware of 2022